We discuss the 7 functions of apocalyptic cinema according to Wynn Gerald Hamonic’s 2017 article, “Global Catastrophe in Motion Pictures as Meaning and Message: The Functions of Apocalyptic Cinema in American Film.”

The article can be found here: https://digitalcommons.unomaha.edu/jrf/vol21/iss1/36/

Note: All quotes below are from the article unless otherwise noted.

The 7 Functions of Apocalyptic Cinema

1.   To Make Sense of the World and to Order Chaos

2. To Attempt to Work through Historical Traumas or to Negotiate Our Way Around Human Horrors

A “naturalization” of plights (disasters which seem inevitable and natural) may deflect audiences away from considering that the circumstances of the time were caused by ineffective governmental and societal systems. The solutions from these films were sought from authority figures bringing the message that they should continue to rely on the current governmental, social, religious, economic, and political systems, a way of thinking which does not encourage them to seek out their own solutions to problems, and does not encourage resistance to and/or questioning of the society as it stands.”[1]

3. To Document our Hopes, Fears, Discourses, Ideologies and Socio-Political Conflicts

“Apocalyptic films, as Bloodsworth-Lugo and Lugo-Lugo rightly point out, function to document our fears and our responses to these anxieties.”

“…the increase in apocalyptic films can be traced to specific anxieties generated by the September 11, 2001 events, exacerbated by official government rhetoric that created an “us and them” dynamic that reactivated old ideologies and created new ones. Susan Sontag adds that science fiction films “serve to allay” as well as “reflect world-wide anxieties.”

The author traces the history of ‘survival-anxiety’ in society and associated apocalyptic media.

Verdens Undergang (the End of the World) in 1916 is often referred to as the first apocalyptic film. In the silent film, a comet passing by earth causes mass destruction. This is directly related to the fears society had as a result of Halley’s Comet passing near earth in 1910.

In the 1931 film End of the World, a stock market crash is responsible for chaos two years after the 1929 collapse of Wall Street.

A slew of apocalyptic films related to atomic bomb and radiation come onto the scene after WWII (Godzilla being one). This continued through the 1980s as a result of the Cold War.

Three large flue pandemics in the 1950s, 1960s, and 1970s generated a collection of apocalyptic films which featured deadly viruses.

A few films in the 1970s revolved around overpopulation, pollution, and so on as a result of the environmental movement.

“Menaces from space, both aliens and celestial bodies” were popular plot devices in the 1990s (The Arrival, Independence Day, Deep Impact, Armageddon, and so on).

The events of 9/11 (2001) inspired a slew of apocalyptic media with varying themes.

In Don’t Look Up (2021) the stupidity of humanity paired with misinformation leads to the downfall of the human civilization.

4. To Critique the Existing Social Order

“[The apocalyptic genre is, “a vehicle of social criticism, and has always been so.””

5. To Respond to Social Crisis, Warning People to Change their Ways in Order to Avert an Imminent Apocalypse

Elizabeth Rosen coined the term “neo-apocalyptic” to describe narratives that “Functions largely as a cautionary tale, positing means of extinction and predicting the gloomy probabilities of such ends. If these tales exhibit judgement, it is of the sort that assumes that no one deserves saving and that everyone should be punished.”[2]

“Tales of the neo-apocalypse involve collapse of the social order, the punishment of human sin and error, and pessimism about humanity’s capacity to rehabilitate itself. Unlike apocalyptic tales, neo-apocalyptic stories posit no happy ending…The message of these movies is clear: if mankind does not change their ways, the events on screen will occur bringing about the extinction of the human race.”

While the films are pessimistic, the message is one of hope. If humans change their ways and work together, disaster can be averted in real life.

Even Don’t Look Up fits into this category—it’s still a narrative of hope. Humanity isn’t salvageable in the film, but it could be in real life if we only were to ‘look up’.

6. To Argue that the End of the World is Not Near and to Refute or Ridicule Apocalyptic Hysteria 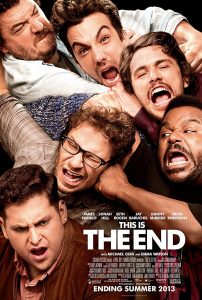 The author quotes a scholar by the name of Robert Lamm who suggests that comedic apocalyptic films function to alleviate our fears of the end of the world.

Lamm says, “’comedy in black humor helps us overcome our fears’ by providing the invulnerability of the ego, which walks away from the blackness unscathed.”[3]

7. To Bring People to a Religious Renewal, Spiritual Awakening and Salvation Message

There are really two functions of religious apocalyptic media:

[1] Wynn Gerald Hamonic, “Global Catastrophe in Motion Pictures as Meaning and Message: The Functions of Apocalyptic Cinema in American Film,” Journal of Religion & Film 21, no. 1 (2017), https://digitalcommons.unomaha.edu/jrf/vol21/iss1/36.